Skip to main content
Dismiss
InnovationQ and the IP.com Prior Art Database will be updated on Sunday, October 3, from 11am-1pm ET. You may experience brief service interruptions during that time.
Close Search
InnovationQ PlusIP StrategyPatent Search & Analytics

Bringing Back Reality: An IP Perspective

In our rush to automate everything to make our lives easier and more efficient, are we actually leaving life behind? Are we losing our appreciation for an original experience in our quest for virtual or augmented reality? Does capturing an experience threaten it?

Educators and entertainers are the most prominent groups to protest the incessant use of smartphones. Teachers have to deal with both the temptations that distract students’ attention and the temptations make it easy to cheat using smartphones. Musicians face copyright issues when fans record concerts and frustration when they look into crowds and see the backs of cell phones instead of faces. Comedians can’t read the audience when staring at a bunch of electronic devices.

Brute-force approaches to combating smartphones range from out-and-out confiscation in the classroom—which is met with anger and anxiety, and cries of oppression from students—to militaristic patrolling of concert venues where violators of no-cell-phone policies are removed from the premises, which is also met with anger and anxiety. It creates a negative and non-productive environment with issues of ownership and civil liberties bubbling to the surface.

Creative professors try positive reinforcement techniques, like offering students extra-credit points for voluntarily relinquishing their cell phones. Teachers preach the benefits of being present. Some perfect the look that means “Put your phone away, or else …” Performers request, cajole and beg audiences to put their smartphones away. But undaunted, people want to record and share and see the concert again and again later. The soft-touch tactics haven’t done much to prevent distracted audiences.

Now, a couple of inventions offer educators and entertainers some hope they can snap their students and audiences back to the moment.

Two solutions include low-tech and high-tech approaches. One is overt, while the other is a bit more subversive.

The low-tech, overt approach: Put your device in a bag, lock it up, keep the bag with the phone in it during the event and unlock the bag after. You have to leave the room, hall or auditorium to unlock at a designated station. The locking-bag innovation comes from Yondr1, and this company definitely operates under the “keep it simple” rule.

[Figure 1] Yondr’s “How it Works” illustration looks like this1 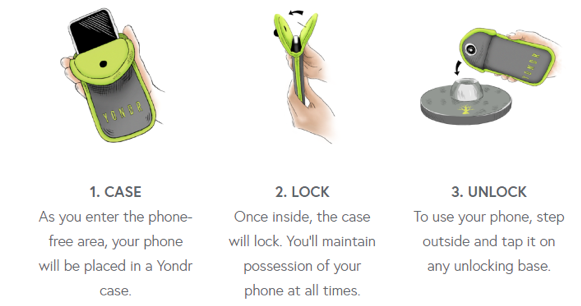 Yondr’s founder, Graham Dugoni, received a patent for his “system and apparatus for selectively limiting user control of an electronic device” (US9819788) in 2017. He describes his vision in the abstract: “It is contemplated that providing disclosed systems and apparatuses may reduce undesirable behavior at communal events by eliminating distractions posed by mobile electronic devices and preventing unauthorized recordings, which together may enhance overall engagement at and enjoyment of such events.”3

Although Dugoni’s intentions may be good, his idea is similar to the teacher-confiscation or take-it-outside ideas. Schools get mixed reviews from students. Some feel victimized and punished, while others actually enjoy being more engaged and less distracted. Obviously, the Yondr pouch has received some push-back from concertgoers, but it seems to be more accepted because of the “everybody has to do it” mindset. And concertgoers do seem to embrace being fully in the moment.

The more complex, high-tech solution comes from Apple. Its 2015 patent introduces “Systems and methods for receiving infrared data with a camera designed to detect images based on visible light” (US9380225). Essentially, this system can be used to block recording. You can bring your smartphone into the show, but the venue can be equipped with sensors and systems that prevent you from capturing images. Thanks to NPR Inc. for this concise explanation: The technology uses “infrared emitters to temporarily deactivate the photo and video capabilities on devices like mobile phones, laptops, stand-alone video or still cameras or any other ‘electronic device with an image sensor.’ Venues, or those in charge of a given space, post an infrared emitter to temporarily and remotely disable those recording functions on devices within the emission range.”2 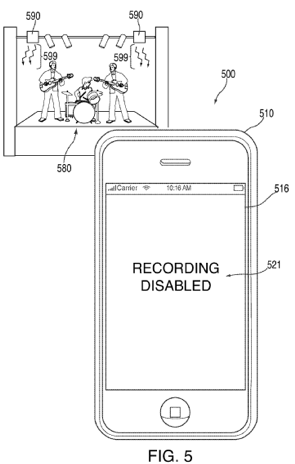 Unlike Yondr, Apple’s product doesn’t have obvious benefits for schools, but it could be useful in commercial, law enforcement, security and other settings. In addition to preventing audiences from recording performances, you also remove the distraction of trying to capture the show, and so fans also enjoy a more authentic experience.

As a society, we’re beginning to realize the impact smartphones have on our social skills and attention levels. So the Yondr innovation and recording blocker from Apple should be just two of many inventions to curb smartphone use, right?

But the IP says No

As a quick check (by no means a thorough search that expert IP searchers can do), a run of the key concepts of the Yondr and Apple patents provides some indication of innovation trend’s direction. Using IP.com’s InnovationQ™, which searches patents, patent applications and non-patent literature, the abstracts from the patents served as search queries and produced the following results, sorted by relevance and ranked with 1-5 stars—5 being the best match.

Results from the Dugoni patent abstract: After the first two hits, which were the actual patent and patent application, the result relevance dropped to 2.5 stars. “Communication devices, networks, services and accompanying methods” (US20120303476) was third in the list, meaning it was the best match to the concept—and not really a match. And it’s only an application from 2012. The top 50 results all sit at about two stars. A novice interpretation of these results: There’s not a whole lot of work going on in this particular space. There could be many reasons. In the current context, it could be people just aren’t interested in shutting themselves off from their smartphones. 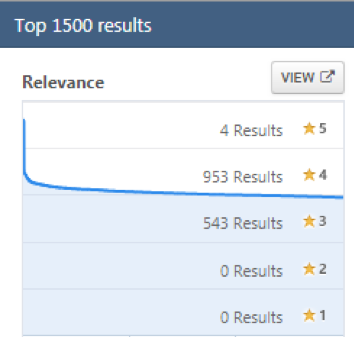 Considering the entire results set was over 4.5 million documents, fewer than a thousand in this space is a sliver of IP. Again, it looks like not a lot is happening in this space.

So from an IP perspective—granted a cursory, tip-of-the-iceberg view—it appears that despite the call to get back to pure interactions, consumers are not creating a market of interest. Innovation in itself can be amazing, but the opportunity to monetize also has to be there to push it forward and protect it. Perhaps the reality is that what we value in life experience is changing, and we cannot innovate backward.