The History of Halloween Costumes, from Protective to Protected

Carving pumpkins decorate front stoops, leaves crunch on sidewalks, grocery store aisles have been brimming with candy for months now. Halloween is upon us! Soon, for one night of treats, the streets will fill with small princesses, ninjas, witches, and superheroes.

Children find choosing and wearing costumes almost as exciting as collecting bags of candy, and although candy distribution is relatively new to the holiday, even millennia ago, as the nights grew longer at the end of October, humans disguised themselves.

The modern Halloween holiday has ancient roots in the festival of Samhain, which was celebrated 2,000 years ago by the Celts. And even though today we may get anxious about creating the perfect office party costume, that’s nothing compared to the costume pressure those original celebrants must have felt.

The ancient Celts believed that the barrier between life and death could be crossed more easily during Samhain. To them, the animal and monster costumes worn during the festival were not at all frivolous. Feathers and animal skins provided important protection: they prevented their wearers from being kidnapped by any wandering spirits that might cross that weakened barrier from the Otherworld. Those are some high stakes. Definitely best not to skimp on the feathers.[1]

In later centuries the Christian church introduced All Saint’s Day. This was similarly celebrated but had a Christian emphasis; saint, angel and devil costumes were all on message.

Although strict religious beliefs caused the inhabitants of some regions, especially New England, to disapprove of Halloween in early America, by the late 1800s, acceptance of the holiday had spread. By that time, immigrants, particularly those from Ireland (the land of Samhain), had brought their seasonal traditions to their new land, and communities often celebrated together. [2] 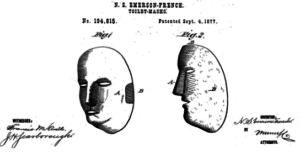 Costumes were still a crucial part of the day, but the local general store most likely wouldn’t have carried any.  Early American Halloween costumes were made at home, and women’s magazines sometimes printed costume-creation instructions. Children often dressed as ghosts, witches, devils, or other supernatural beings. 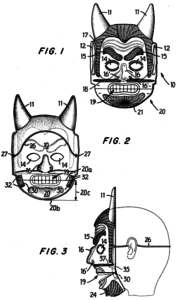 In that era, a spooky Halloween costume wasn’t supposed to be realistic. Identity concealment was part of the fun. Young people likely would have wanted to pull their Halloween pranks incognito. And did they ever pull pranks! During the 1920s and ‘30s, Halloween vandalism became a big problem. As a result, Halloween celebrations began to lose their emphasis on spookiness and became directed toward keeping young people safe – and busy!

After the Great Depression, costumes tended toward lighter themes.  Children in clown, animal, or cowboy costumes and the like roamed the streets on Halloween night. Specific character garb grew in popularity as well, in part because during the 1950s store-bought costumes became more affordable. [3]

More recently, far fewer costumes have been constructed completely at home than in previous times, and in recent decades Halloween outfits often reflect pop culture figures or events. The incredibly popular Nixon mask, for example, was a reaction to the political developments of the 1970s. ET costumes were common in the 1980s, and many older partygoers wore garb influenced by Halloween, Friday the 13th, and the decade’s other slasher movies.[4]

A different kind of scare around Halloween: litigation! 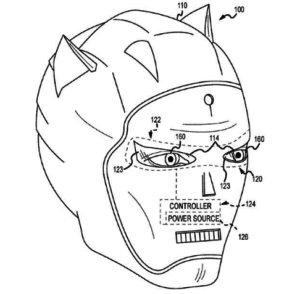 Today, some children still choose to dress as animals or spooky creatures on Halloween night, but costumes from video games, movies, and television shows have flourished. Elementary school classrooms are not only filled with princesses but with specific superstar Disney princesses such as Tiana or Elsa and Anna. Tiny Marvel superheroes run from door to door, and Pikachus abound. Media companies continue to eagerly license their characters in hopes that consumers will pay to embody them on Halloween.

Still, some particularly industrious fans do take great pride in painstakingly recreating the looks of favorite characters themselves, often with very impressive results.

So if media companies protect their characters’ likenesses, could that earnest-looking Harry Potter at the door with the homespun robes, authentic-looking lightning-bolt scar, and hand-whittled wand be an infringement on J. K. Rowling’s intellectual property? Happily, the fair use doctrine allows for the use of such copyrighted works for limited purposes. That young wizard is probably safe. Even cosplayers at Comicon-type conventions are generally protected by fair use, as long as they do not profit from their creations.

Those selling costume components or otherwise making a profit from costumes closely associated with copyrightable characters – on Halloween or otherwise – likely have more to worry about. Small or large costume manufacturers and costume vendors fall into this category.[5]

But as for the rest of us Targaryens and presidential candidates chatting near the punch bowl, we can relax and enjoy our costumes thanks to both those ancient trendsetting Celts and the more recent protections of the fair use doctrine.