Amid a global pandemic, medical professionals have been on the front lines combatting the virus. We cannot thank the nurses, doctors, and all other healthcare professionals enough for their work. And throughout this crisis, we have learned the important role PPE (or personal protective equipment) has in the safety of healthcare professionals, especially now that we have faced a shortage. We can all agree on the benefits of PPE, but where did it originate from? 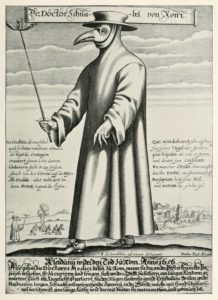 You may be familiar with the ghoulish bird-mask doctors related to the Black Plague. The masks and protective gear were worn in response to the miasma theory, an obsolete medical theory that held diseases—such as cholera, chlamydia, or the Black Death—were caused by a miasma, a noxious form of “bad air”, also known as night air. The theory held that the origin of epidemics was due to a miasma, emanating from rotting organic matter.

Though untrue, the miasma theory at least drew a connection between bad-smelling decomposing things and sickness. The reason the plague doctors wore those strange masks with the beaks, was that their beaks were stuffed with herbs meant to protect them from the bad air they might otherwise inhale.

Until the discovery of germs and some massive changes in medical thought, PPE wouldn’t really exist. However, it was the miasma theory that began forging the connection between some kind of protective or clean garment and personal safety.

Even as medical professionals began to understand the nature of epidemiology and the way disease could spread (via pathogens and not smell) in the mid-1800s, the adoption of more stringent protocols was slow.

Surgical gloves, for example, have an interesting history. Physicians recognized the need to protect their hands from potentially transferrable maladies, some utilizing a segment of sheep intestine to cover their hands, while others used gloves made of cotton, silk, or leather. It wasn’t until 1844, when Charles Goodyear developed a process for the vulcanization of rubber, that rubber could be used for gloves. In 1899, Goodyear Rubber Company was commissioned to make the world’s first thin rubber gloves used in medicine. 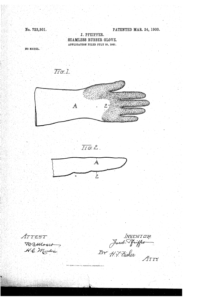 Like early medical gloves, surgical face masks were also very crude. In the mid-1800s, they were not much more than a glorified handkerchief or gauze tied around one’s face, and they weren’t designed to filter airborne disease. They were (and are) used to prevent doctors from coughing or sneezing droplets onto wounds during surgery. It wasn’t until the 1920s that people began to truly understand the importance of having medical personnel wear these masks around sick patients and during surgery.

In the 1970s, in an effort to protect workers, the Bureau of Mines and the National Institute for Occupational Safety and Health teamed up to create the first criteria for what they called “single-use respirators.” The first single-use N95 “dust” respirator as we know it was developed by 3M and approved on May 25, 1972.

3M repurposed a technology it had developed for making stiffer gift ribbons into a proper filter for respirators. As particles, whether silica or viruses, fly into this respirator, they get stuck. 3M also added an electrostatic charge to the material, so even smaller particles find themselves pulled toward the fibers.

It was still several decades before the N95 respirator circled back to a clinical setting. In the 1990s with the rise of drug-resistant tuberculosis and HIV, the N95 standard was updated for healthcare settings, and doctors began wearing them when helping tuberculosis patients. Today, respirators are rarely used in hospitals to this day, but outbreaks like COVID-19 necessitate so much protection.

The N95 respirator has evolved over hundreds of years in response to multiple crises. That evolution will only continue through and beyond the COVID-19 pandemic. 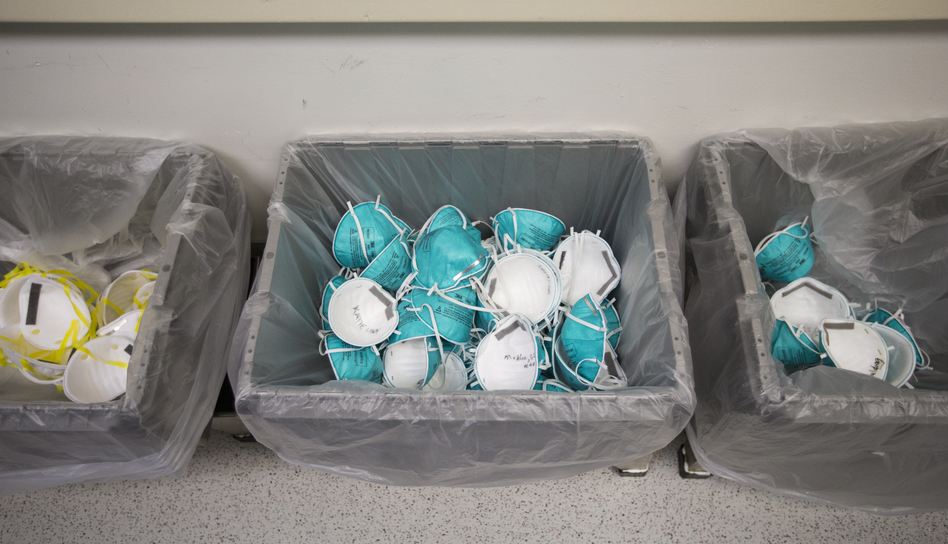 Used N95 masks are collected at Massachusetts General Hospital in Boston on Monday.

According to the Occupational Safety and Health Administration (OSHA): Personal protective equipment, commonly referred to as “PPE”, is equipment worn to minimize exposure to hazards that cause serious workplace injuries and illnesses. These injuries and illnesses may result from contact with chemical, radiological, physical, electrical, mechanical, or other workplace hazards. Personal protective equipment may include items such as gloves, safety glasses and shoes, earplugs or muffs, hard hats, respirators, or coveralls, vests and full body suits.