Looking Forward, Backwards, and Sideways: A Patent History of Elevators

ThyssenKrupp recently announced the first functional MULTI elevator at their test tower in Germany. They’ve caught the imagination of the world: perhaps one day the great glass elevator of Willy Wonka will become a reality. The MULTI is an elevator that can go not just up and down, but sideways too.

Why try to make an elevator go sideways? Today half of the world’s population lives in cities. This number is expected to rise to 70% of the population by the end of the century. As we seek to build taller and taller buildings to fit more and more people into cities, the need for new technologies to deal with crowding grows.

One attempt to meet the need is the MULTI, which is using the same maglev or linear motor technology used in bullet trains from Japan but turned 90 degrees. This change could be used in many different transportation options. However, the primary focus is on reducing the footprint of elevators in buildings, while still being able to move a large number of people quickly and efficiently.

Let’s take a look back at the history and patents for some of the other major advances in passenger elevator technology – the foundation for where we are today.

The idea for hoist systems for moving goods and building materials has been around since the Egyptians. The oldest known version of an elevator meant specifically for passengers wasn’t patented and was a chair hoist with ropes and pulleys that was lifted by servants for King Louis XV. The first primitive version of what we know as multiple passenger elevators today occurred in 1823 when two architects Burton and Hormer built the “ascending room” as a tourist attraction in London.

Then, in 1835 two English architects Frost and Stutt made the next big leap in passenger elevator design. They built the “Teagle”, a steam-driven lift with a belt drive and a counterweight for added safety. However, elevators were still in their infancy, and the public didn’t have much faith in their safety due to early failures. 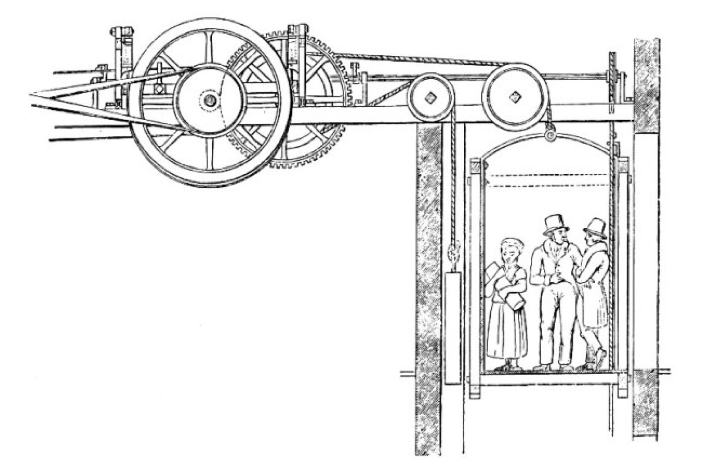 The Teagle lift with belt drive (Patent not found).

This all changed in 1853 at the New York World’s Fair, where Elisha G. Otis introduced the first steam elevator with a safety mechanism. He demonstrated the elevator to wide crowds and proved his faith in his new safety brake, should one of the supporting cables break. This safety mechanism led to the general acceptance of the elevator because it increased public confidence. 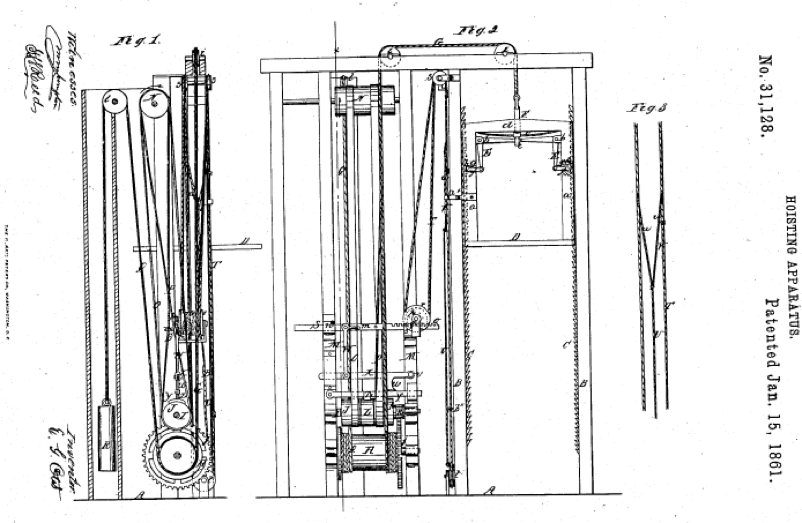 However, in 1859 a man named Otis Tufts was actually the first in the US to patent what we think of as a passenger elevator. It used a mechanical screw drive powered by a steam engine to lift the passenger cabin. While it did have safety mechanisms, it didn’t reach widespread usage. 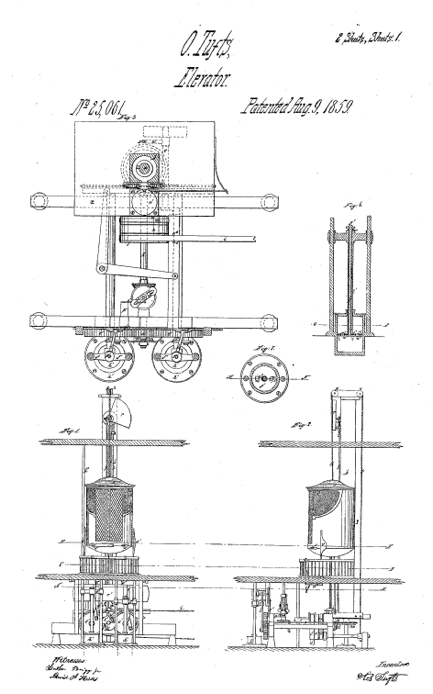 Patent 31128 “Elevator or Hoisting Apparatus for Hotels” first US patent for the passenger elevator. 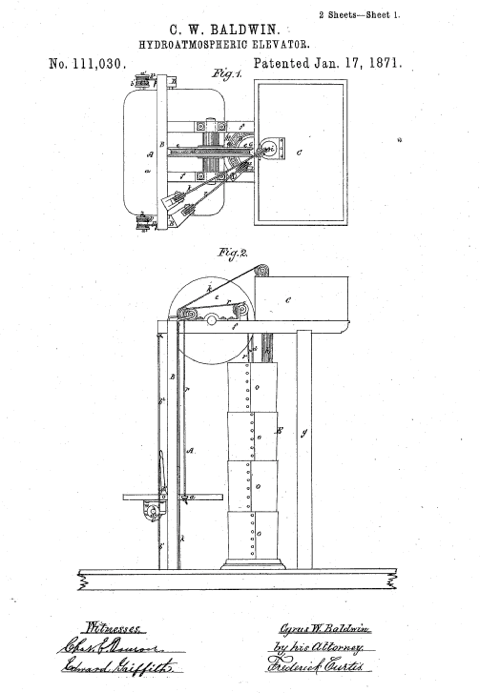 Patent 111030 “Hydroatmospheric Elevator” Here is an early patent for a by C. Baldwin

After the Great Chicago Fire in 1871, elevator safety was again a concern, especially regarding the doors. There was a general concern that the elevator shafts were a flue from which flames could travel from the lower to the upper stories. Many early elevators were subject to human error such as forgetting to close the doors to the floor. So, there were numerous patents relating to auto-closing doors, the most famous one is to John Meaker. 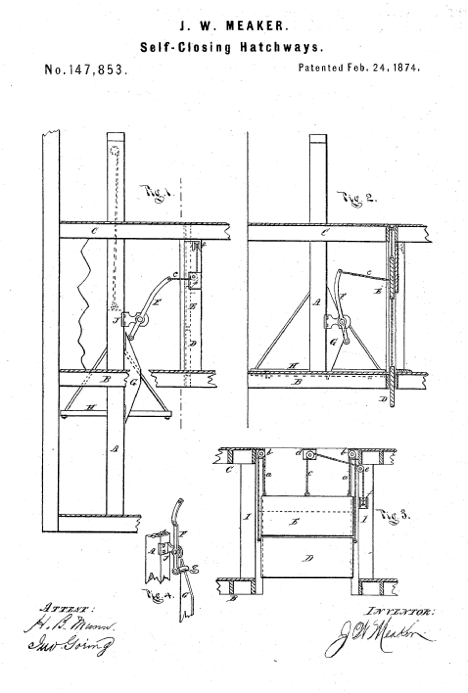 In 1879 Werner von Siemens is credited with the invention of the first electric elevator, which was a spinoff and practical application of his dynamo machine technology. He built a working version of the 1880 “Mannheim Pfalzgau Trade & Agricultural Expedition” around the same time that British inventor Frank Sprague invented floor controls and acceleration controls. 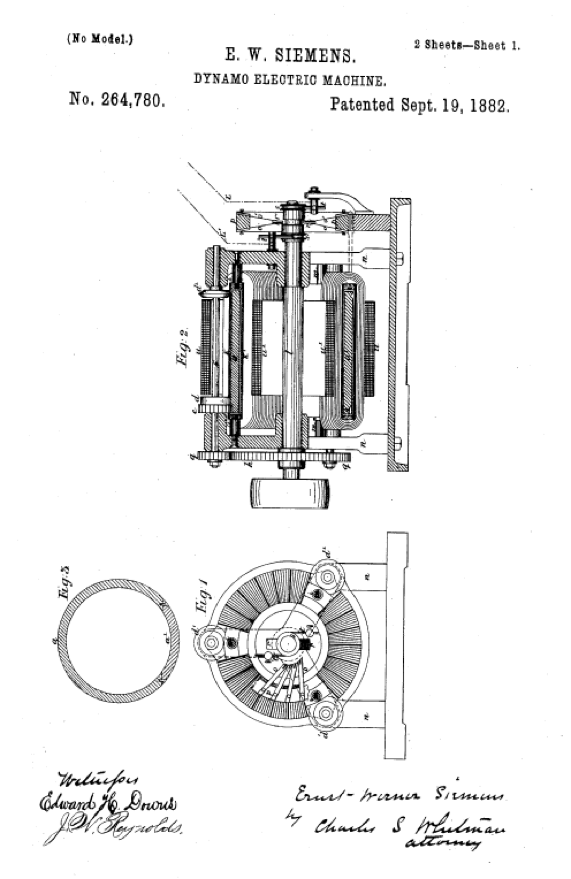 In 1868 the first revolving elevator was installed in Oriel Chambers of Liverpool. These cyclic or paternoster elevators were the first to put multiple cabins in an elevator shaft and they also were the first to go in multiple directions. However, they had safety issues since their inception and are now being removed from most buildings where they were installed. According to many sources, the first patent for a cyclic elevator was to British Engineer Peter Hart in 1887. 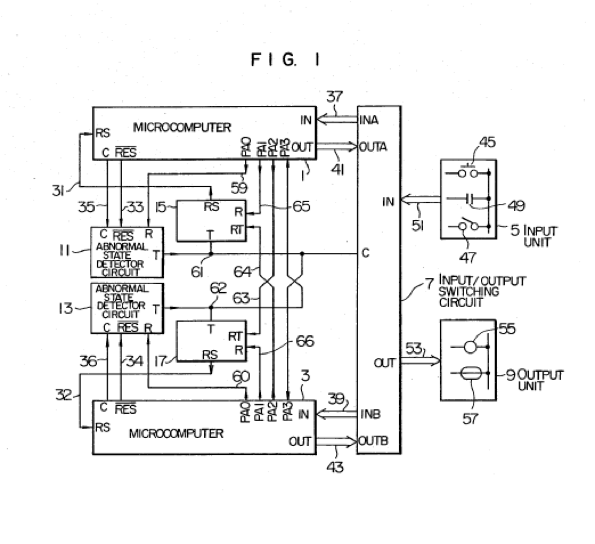 In the 1990s and 2000s, the shift in the elevator industry was toward methods to have multiple cars moving independently in a single elevator shaft. With many cars in a single shaft, it became possible to move more people faster and to take up less square footage of a building. The addition of computer control systems made it so that concerns of collisions could be avoided. All of the large elevator companies developed some form of having many cars in a single shaft. In fact, you have likely used this system in a larger building without even realizing it. 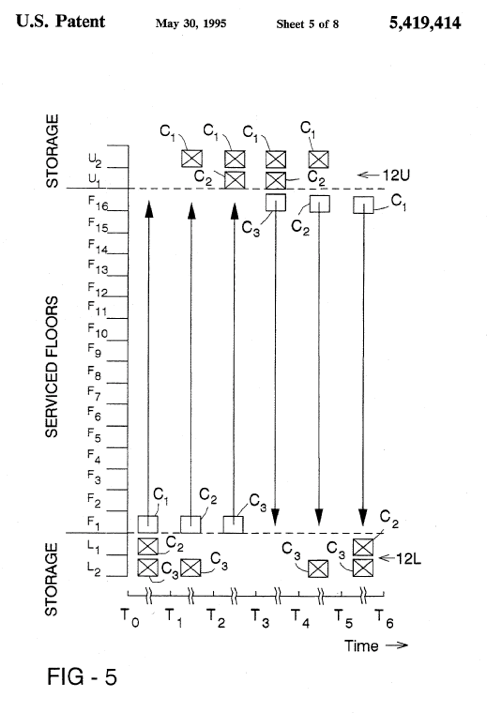 Patent 5419414 Shows one version of this system where the extra cars can be moved into “storage” above or below the floors being serviced.

The newest advancement in elevators builds on all of these technologies and adds a new way to move elevator cars. Starting in 2000, elevator companies were filing patents for the use of linear motors or maglev to replace old direct drives and mechanical systems for moving the cars. ThyssenKrupp recently took the use of these new motors one step further and has developed what they are calling the MULTI. By harnessing the technology used in bullet trains and applying it to elevators, multiple elevator cabins can run in a single shaft and in multiple directions. 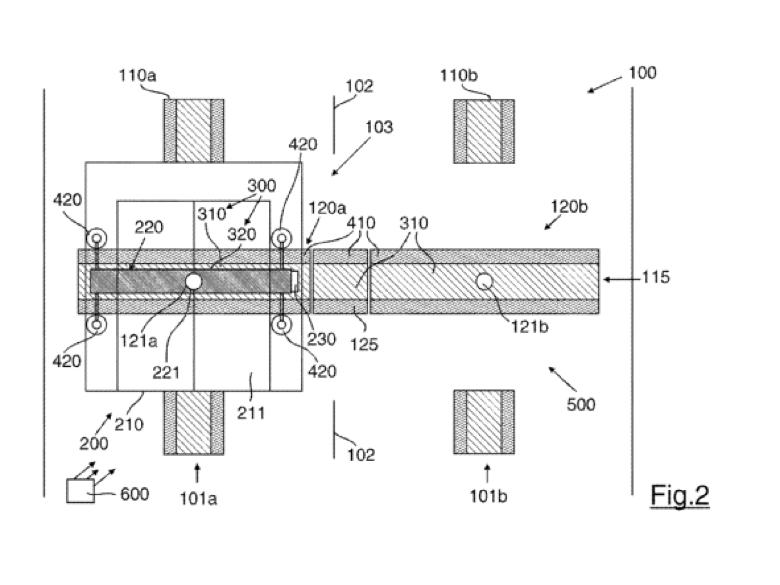 Patent Application US2017/0107080 Shows the different guide rails for an elevator car to move in multiple directions.

The recent advancements in elevator technologies have reinvigorated a sense of wonder about what can be accomplished through engineering. As the population grows, more problems are going to come that will need to be solved. There is a greater need to look backward, forwards, and sideways to find technologies that can be applied to alternative areas. Identifying potential cross applications, like that of the dynamoelectric machine as a power source and the linear motors of the bullet train will make it possible to even turn fictional ideas from our favorite books and movies into reality. The MULTI perfectly exemplifies building on existing technologies to create the solutions of tomorrow.