Skip to main content
Dismiss
InnovationQ and the IP.com Prior Art Database will be updated on Sunday, October 3, from 11am-1pm ET. You may experience brief service interruptions during that time.
Close Search
InnovationQ PlusPatent Search & Analytics

We have made it through a long, cold, and troublesome January here in the United States. And the innovation train never stopped. Despite the government shutdown from December 22, 2018 to January 25, 2019, the USPTO remained operational and open for business. Funding was enabled through previous fee collections and was not exhausted before the end of the shutdown.

Let’s take snapshot of the patents that the USPTO published to start out the new year. Using IP.com’s InnovationQ™, a search was performed with only filters, no concept query, to create a time frame without limiting the scope of innovation. The filters were:

A Term Cloud of the most recent 1500 patents can provide initial insight into the inventive direction moving from 2018 into 2019. The most frequent terms, as shown, are network, layer, information, image, data, signal, user, and so on. Joined with some of the smaller terms in this visualization, such as display, transmit, and service, it would appear that IT is a strong player and might be heavily focused on the end user. Is the near future going to see more on the market in everyday AI and IoT?

The number of ideas reflected in the Term Cloud has significantly grown over the past few years. Within this set of published patents, most of the applications were submitted between 2015 and 2017, peaking in 2016. Perhaps looking more closely at the earlier applications would help build the story of why and how these areas took off after 2013. 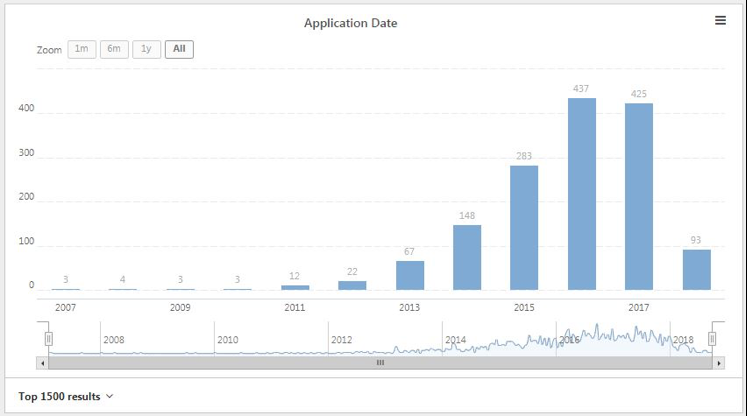 Reviewing the list of assignees, it becomes more evident why the Term Cloud seems to be pointing toward methods and systems for end-user applications and services. Samsung is leading the pack, and many of the other assignees we know have customer-facing products. 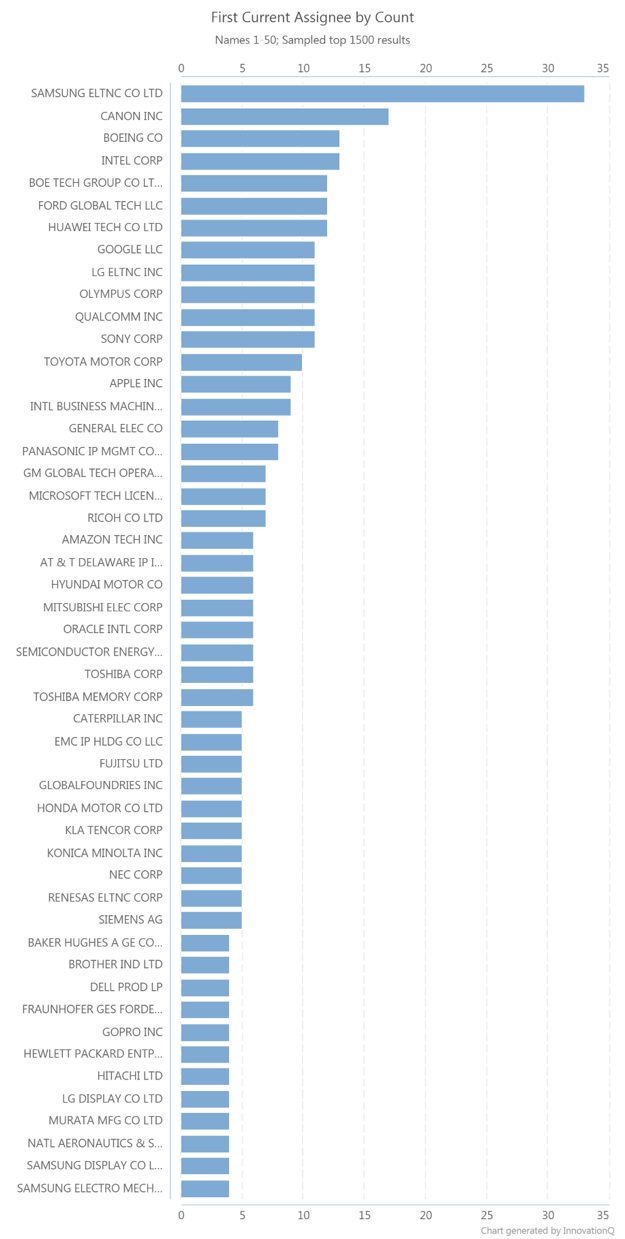 But if the most active assignees holding January 2019 patents are primarily customer focused, what is Boeing doing in there? Perhaps that is worth exploring. Could this be a disruption or just a commonality? Are terms crossing over or concepts overlapping? If you need a closer look, InnovationQ will let you drill down to those 13 Boeing patents and easily perform subsequent searches. You could quickly click over into that subset of patents. Then, take your search in a different direction by performing a “more like this” action or borrowing some text from an abstract and using it as a concept query.

This simple, filter-based search provides a high-level view of a moment in innovation time. The tool that enabled that search, InnovationQ, can take you to the next step, or down a path of multiple steps to build a well-informed IP strategy.

But before going, just consider one more patent that stands out among the most recent. On this January day, when the birds are battling blowing snow and we are hiding inside and under layers from the -20˚F wind chill, this invention, “characterized by its white-colored inflorescences, medium green-colored foliage, and moderately vigorous, compact, upright-mounded growth habit…” brings us hope for spring: USPP30148 Hydrangea plant named ‘Little Ema’.