Dismiss
The InnovationQ application will be updated on Sunday, May 31st from 10am-noon ET. You may experience brief service interruptions during that time.
News

The First Voting Machine Was to Help Voters

When you go to the polls this Tuesday, November 6, 2018, you might stand behind a thick curtain and flip a lever to cast your ballot. You might sit in a cubicle or stand at a table with dividers between you and another voter. It depends on your state; across the US, in 2018, different states use one of four different voting mechanisms. The level of complexity varies.

The Direct Recording Electronic (DRE) Systems allow voters to directly enter their selections into an associated computer’s memory via a touch screen, dial, or button. The computer’s hard drive or cartridge immediately stores the input. In some locations, the system also produces a hard copy of the voter’s choices for the person to review before casting the final votes. These paper records can be used later to resolve any discrepancies. To accommodate disabled or otherwise compromised DRE users, Ballot Marking Devices and Systems can supply methods for manual input and tabulation. A little farther down on the technological scale are the Optical Scan Paper Ballot Systems. The voter receives a paper ballot and uses a marking pen to fill in an open shape (e.g., circle, rectangle) next to the desired candidate or other item. Then, under the supervision of a voting station volunteer, the voter feeds the ballot sheet into a scanner (alternatively, the ballots are collected and scanned at another site), which records and stores the information. Finally, some states use the Punch Card Voting Systems, which are more traditional. Given a paper card and a clipboard-like device, the voter indicates their selection by punching small holes in the card. The votes are then manually tabulated or fed into a scanner for review. [1]

Regardless of which system you use, second only to the need for accuracy is the need for privacy and secrecy during the voting process. When did voting systems and methods begin to ensure that our choices were safeguarded from misuse or misinterpretation?

The first solution to the secrecy problem was presented 1858 in Australia. Concerned about election fraud as well as privacy, the state of Victoria wanted to simplify the ballots. The government printed the ballots and each voter received on at the designated polling place. The ballot had columns for each political party and rows for the individual candidates. If a voter wanted to select along party lines, they could simply mark the circle at the top of the respective column and vote for all candidates in that party; otherwise, a person could select individuals by row. The Australian secret ballot laid the foundation for modern polling. [2]

Later into the 1800s in the United States, protecting voter privacy and preventing fraud remained a concern. The main problem with the Australian secret ballot was not it the submission, but in the counting. There was some subjectivity and room for interpretation when reviewers looked at the voters’ written entries. If an X did not fall exactly within the bounds of the entry box, it might not have been counted. If a checkmark was too rounded or didn’t look exactly right, then the vote could be rejected. Thousands of ballots were discarded. Even with oversight measures, at that time, the manual entry and tally process left room for corruption and tainted elections. [2]

In 1889, Jacob H. Meyers, of Rochester, NY, presented a high-tech solution with the first voting machine. In the introduction to his patent, Meyers states the objective for the machine:

… to provide one by the employment of which an honest vote can be had and counted without liability of voters being intimidated, the balloting being secret, or of their voting more than once for the same candidate or different candidates for the same office, and as the votes are counted as fast as the voter indicates his preference the total number cast for each candidate can be ascertained rapidly and accurately at the close of the polls. [3]

Meyer’s machine comprised a booth with a series of doors that automatically closed the voter inside, simultaneously ensuring privacy and preventing any unnecessary coming and going. The ballot mimicked the Australian paper ballot in that it followed the column-and-row design, with the inclusion of color coding. Red represented Republican candidates and blue represented Democrats. The voter pushed keys, which locked in a single vote at a time. Further, Meyer wanted to make sure that every man that came to the polling place would have access to his machine. Many eligible voters were either illiterate or literate in a foreign language but not in English. Using the color-coded system, Meyers had a diagram of the ballot hung on the outside of the voting machines. The voter could, with some assistance, identify his selections before going into the booth, and then simply punch the appropriate keys to cast his vote once inside. 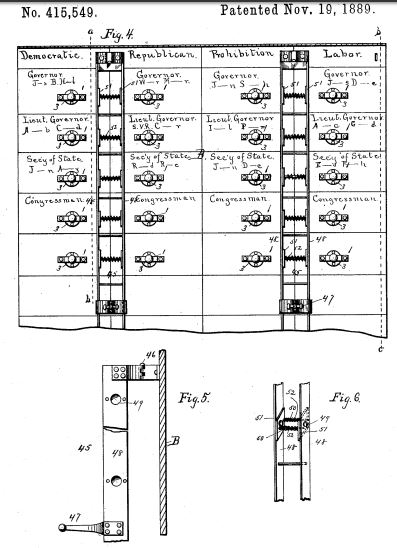 Meyer’s Automatic Booth lever voting machine was first used in a town election in Lockport, NY in April 1892. At this scale, the machine was a success. Local governments in the Western NY area saw the benefits of the automated voting process and wanted to use it.

The inner workings of the Meyers voting machine were complex for the time and held thousands of springs. This was the design flaw, as the springs could not tolerate the repeated use and friction against one another, and corroded during an 1896 election in Rochester, NY. It was a disaster that resulted in miscounted votes and political lawsuits. Meyers did not recover from this and lost his business.

The spring mistake aside, the 1889 Voting-Machine, Patent #415,549, set a standard for the evolution of voting machines. According to early inventors, the machines that collect our voices must be accessible to all, regardless of social or economic standing. Disabilities should not prevent a person from reaching the poll. Voters are entitled to secrecy and privacy. Tallying the votes must be simple, accurate, and fast. Meyer’s design flaw was quickly corrected by Slyvanus Davis with a spring-free direct action method for casting votes. Another inventor, Gillespie, replaced the booth with the curtain.

On November 6th, whether you stand behind a curtain and push a lever, sit at a desk and fill in circles, or step to a booth and enter your votes on a touch screen, consider the innovations that are behind you that allow you to exercise this important right.