Skip to main content
Dismiss
InnovationQ and the IP.com Prior Art Database will be updated on Sunday, October 3, from 11am-1pm ET. You may experience brief service interruptions during that time.
Close Search
Patent Search & Analytics

How Popular Inventions Came to Life: The Treadmill

As you stand at the gym in your new cross-trainers, trying to figure out how to operate the cardio apparatus with the complex user interface, you might be surprised to know that the treadmill has been with us for centuries. Humans have applied the treadmill concept almost as thoroughly as we have applied the wheel. Like most inventions, it began as the solution to one problem and expanded to solve many. Here are just few highlights from over the centuries.

Problem #1: Moving Heavy Stuff
Human nature never changes. Even back in the first century AD, the Romans were looking for ways to do more with less (and we thought this was a modern idea). In building walls and other structures for their city, four men were needed to lift a 3,000kg stone. Builders wanted to lift more weight with less manpower. So, they attached a treadmill, which was actually a treadwheel, to an early version of the crane. This wheel stood vertically, and the man worked inside, literally crawling forward to move the wheel. One man in this giant hamster wheel could help the crane lift 6,000kg [1]. 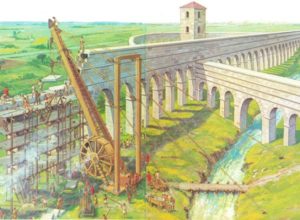 The Treadwheel (or hamster wheel) Crane [2]

Over the following centuries, the treadwheel evolved into the treadmill. The machine could work as a horizontally placed platform, resting at a variety of inclines, on which either men or animals could walk to generate a lot of power with the least number of beings. Treadmills were used in farming and early industry for grinding grain, churning butter, hauling loads, pumping water through mines, moving immense logs across frozen lakes, and more. For an invention that used forward-motion without going anywhere, this idea continued onward.

Problem #2: Idle Prisoners
Although the treadmills were effective, the physical and mental toll they took on their “operators” did not go unnoticed. It was grueling and monotonous work. Torturous, even. How could that be advantageously used? 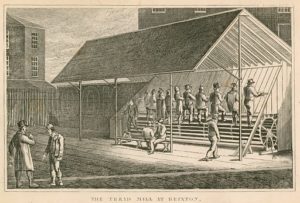 In early 19th century England, an innovative engineer who happened to be the son of a miller, thought prisoners needed more activity and perhaps a sense of productivity. He altered the design of the treadmill to resemble an elongated water wheel. The prisoners continuously stepped on the treadmill to make it rotate. This was termed the “never ending staircase”. Sometimes the power in this machine was harnessed to move water. Brixton Prison, shown below, used its prisoners in perhaps six-hour shifts to supplement the facility’s windmill for grinding grain [3]. Most of the time, through to the middle of the 20th century, the prison treadmill was used as a form of punishment with no other real purpose.

Problem #3: Getting Fatter
As we all recognize, with the advent of the industrial revolution and using mechanics to replace the labors of man and beast, our physical activity significantly reduced over the 20th century. The 21st century and the rise of the digital age have further reduced the need to move to accomplish even effortless tasks. We can speak to turn on a light and tap a knuckle on the refrigerator to see what is in it. As our locomotion has decreased, our sizes have increased. The Center for Disease Control (CDC) reported that “as of 2016, 40 percent of US adults and 19 percent of youth were obese” [5].

The causes for weight gain are many. Part of the solution is increased exercise. For many of us, one of the first assistants is the (dreaded) treadmill. We have known this since 1913, when the first treadmill was patented as a Training-machine for improving cardiovascular health [3]. The inventor, Claude L. Hagen, sought to better previous treadmill designs to make them accessible and useful to more people. He knew there was a need and a market. 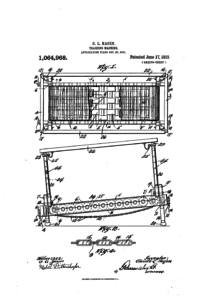 Since 1913, the need and market for exercise equipment has hugely grown. The idea for required physical fitness has ironically merged with mechanics and advanced technology to offer treadmills that not only get our hearts pumping, but also monitor our biometric data while taking is on virtual runs through mountainsides and on beaches. Patent US10150025, Process to aid in motivation of personal fitness, health monitoring and validation of user (2018) is one example [6]. It combines a health monitor with actual images of the user that the system alters to show the potential results of the exercise (e.g., thinner, improved muscle, etc.). 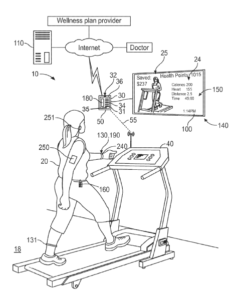 Today, the stuff that needs heavy lifting is walking in our shoes. We are prisoners to our own bad habits. The treadmill of the 21st century might be new, useful, and non-obviously motivational. What are the next steps? [1] http://www.attendly.com/the-ancient-and-surprising-history-of-the-treadmill/
[2] https://forums.spacebattles.com/threads/the-hamsterwheel-crane-a-lost-treasure-of-rome.448800/
[3] https://en.wikipedia.org/wiki/Treadmill
[4] https://www.lookandlearn.com/history-images/search.php?t=2&q=treadmill&n=2
[5] https://www.vox.com/2016/8/31/12368246/obesity-america-2018-charts
[6] https://iq.ip.com/
Share Tweet Share Pin