The holidays are upon us, and that means breaking out the lights, wrapping gifts and addressing greeting cards to friends and family. When you take a step back, you’ll realize that that holiday season is full of unique inventions designed to spread holiday cheer, from yule logs to candy canes. Perhaps the most ubiquitous holiday decoration of all, the Christmas lights, have a surprising historical origin. Here is the invention story of Christmas lights.

Before electric Christmas lights, people would use candles to light up their trees. Fairly dangerous, this practice led to many house fires. But would you have ever thought Christmas lights to be associated with one of the most famous inventors, Thomas Edison? His associate Edward Johnson created the first string of Christmas tree lights by hand-wiring 80 red, white, and blue lights. During the Christmas season of 1880, these strands were strung around the outside of his Menlo Park Laboratory. Railroad passengers traveling by the laboratory got their first look at an electrical light display.

But it would take almost forty years for electric Christmas lights to become the tradition that we all know and love. 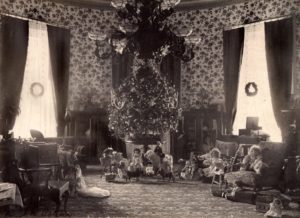 In 1895, President Cleveland requested that the White House family Christmas tree be illuminated by hundreds of multi-colored electric light bulbs. But during this time, the wiring of electric lights was very expensive and required the hiring of the services of a wireman. In 1903, General Electric began to offer pre-assembled kits of Christmas lights, that the décor caught on in wealthier families that could afford the luxury.

Called a “festoon,” GE’s outfit consisted of eight green pre-wired porcelain sockets, eight Edison miniature base colored glass lamps, and a handy screw-in plug for easy attachment to a nearby wall or ceiling light socket. GE, however, was unable to patent their string (or festoon), and the market was open to anyone who wanted to manufacture the strings.

Throughout the early 20th century, improvements were made to incandescent string lights, any most functioned the same basic way as Edison’s original light bulb: electricity flowing thought the filament in the bulb, the filament heats up by electrical resistance, the bulb gets very hot, and light is produced when metals in the filament become so hot that electrons are excited to higher orbital levels and almost immediately fall back to their original orbital level.
These Christmas lights burned so hot that they were about as dangerous as the candles they were advertised to replace.

Christmas Lights in the Modern Era

LED (Light Emitting Diode) Christmas lights, on the other hand, provide advantages, when it comes to energy efficiency and temperature, as well as new lighting designs and techniques. LEDs produce light in the same way that incandescent lights do, but are much safer since the electricity runs through the material directly to excite the electrons, not heat.

LEDs were first patented by James Biard and Gary Pittman while working for Texas Instruments. Their patent (Pat. No. 3,293,513), titled “Semiconductor Radiant Diode” and granted on December 20, 1966, described the first patented solid-state device to produce light from electricity, although the light wasn’t visible to the human eye. Innovation progressed at GE, where Nick Holonyak invented the first LED to produce visible light, in this instance red (Pat. No. 3,249,473) and he was granted a patent on May 3, 1966. 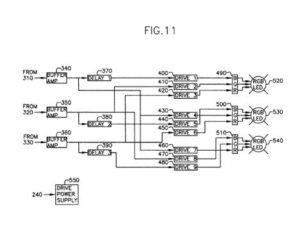 The latest advancements in Christmas lights can in December 2013, when Kenneth Wells and Victor Hatch were granted a patent (Pat. No. 8,614,632) for a “Method of and Apparatus for Controlling a Source of Light in Accordance in a Source of Sound.” This system controls RGB lights and converts sound waves into signals that control the lights, so instead of having to program the lights to the music, one can allow the system to interpret the music and produce a light show.

What does the future of Christmas lights look like? Inventors have made huge strides to make the décor safer and more accessible to households across the country. It’s likely that the color of LED white lights will improve, and as more people use LED lights, energy usage and cost of operating lights will go down. The way Christmas trees will be illuminated will continue to evolve, and the lights will become less and less like the original incandescent lights used; they can be small and at the same time bright and do not need to take the shape of the original light bulb.