It’s that time of year again…

Fantasy football leagues are synonymous with the end of summer. When the NFL preseason kicks off, people begin scouting the depth charts, attending draft parties, and picking their teams. Have you ever thought about the intellectual property and technology that is behind these online sites? Did you also know the competitive game mechanism behind fantasy football is patented?

The following year, in 1963, Winkenbach invited 8 people to his home and to try out their system by having a “live draft.”  Each person had to select players to fill an 18-person roster. This was the first-ever draft in the inaugural GOPPPL (Greater Oakland Professional Pigskin Prognosticators League). A few years later in 1969, one of the original members from the GOPPPL who happened to own a sports bar, decided to add more teams to the league. Slowly the word spread throughout the Oakland and San Francisco area bars. However, it took many years for it to catch on.

In 1976, a group of high school students held their first draft. It was $25 to take part and that included a draft kit and scoring rules – they manually scored each week. Now over 4 decades later their league, Coach the Pros, will have had their 44th draft. That makes them the longest operating fantasy football league in the world.

Fantasy Football in the Modern Era of IP

Despite its beginning decades earlier, the interactive competition wasn’t patented until the 1990s. The Pigskin Playoff was the first national fantasy football competition developed in 1989 and what the current Daily Fantasy Football game is modeled after. This was the first game to have multi-players competing by using football statistics and a simple scoring system. The group of inventors that created this version of the game was granted patents for Interactive Game System and Method; Interactive Contest System in 1991 (US Patents: 5,018,736A and 5,263,723A). 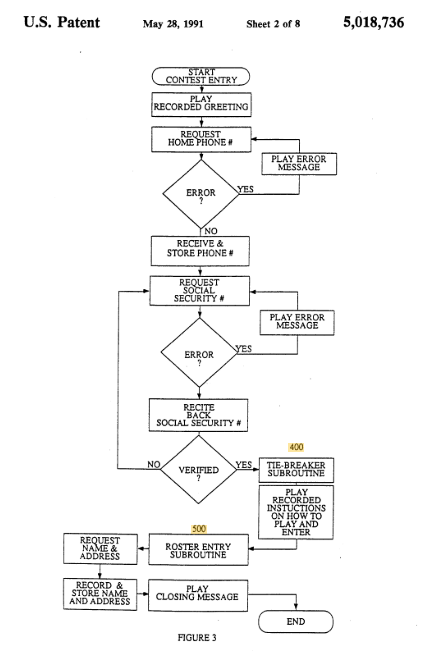 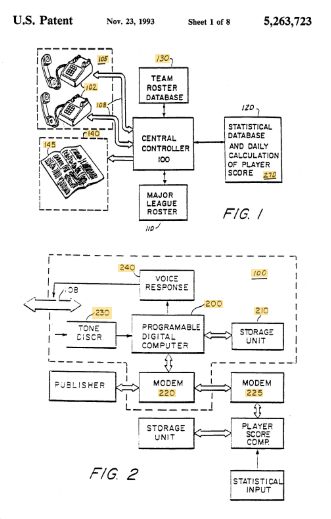 An interactive contest system is provided which permits competition among a plurality of remote participants. The system includes a central controller, storage devices for storing a Contest Roster, a plurality of communication linked to the controller, and a publication distributed to all participants. Each participant’s team roster is evaluated on a periodic basis according to a formula for calculating each member’s score employing a database of variable performance statistics which reflect the roster members’ actual performances. Team roster totals are compared for discrete periods of competition to determine which participants have accumulated the highest score.In 1997, CBS launched the first free publicly available fantasy football website. By 2000, all the sports media websites launched their own version of online fantasy football creating competition in the space. The NFL launched their own version in 2010 and today, its estimated that over 19 million people play in fantasy football leagues online nationally.

The growing popularity of fantasy football has led to legal challenges by the original patent holders. In November of 2015, Virtual Gaming Technologies LLC, the original patent owner, filed a complaint for patent infringement, claiming DraftKings and FanDuel were infringing on two of its patents, through the companies’ respective websites. While the cases are closed and appear to have been settled out of court, it demonstrates the importance of protecting your IP with a thoughtful strategy.

What would have happened if Wilfred Winkenbach got a patent for his original fantasy football league? His patent might have prevented the filing of the 1991 patent. Or might have been a citation to the version we are familiar with today. Moral of the story, if you think you have a great idea, patent it!