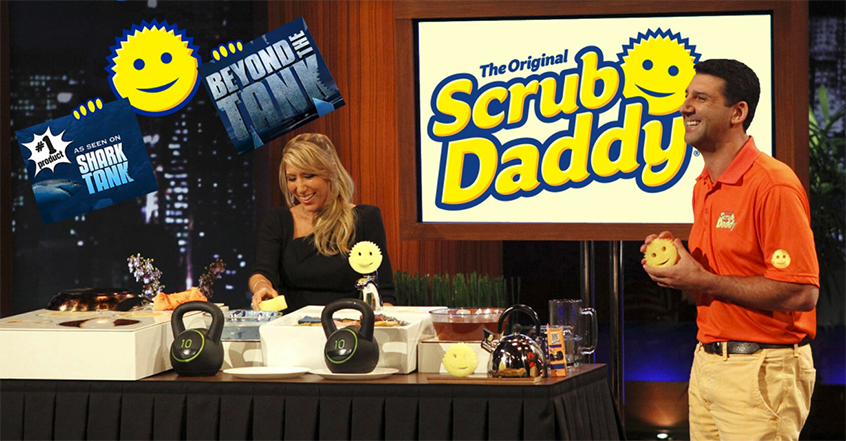 Since the 2012 season of Shark Tank, when cast member Lori Greiner offered Scrub Daddy founder Aaron Krause $200,000 for a 20% stake in the company, Scrub Daddy has sold more than 10 million sponges, reaping more than $50 million in sales and becoming Shark Tank’s most successful product ever.

The smiley-faced sponge has eyes that grip fingers and a mouth that cleans both sides of utensils. Its proprietary material changes texture in response to water temperature: Firm in cold water for hard scrubbing, soft in warm water for gentle wiping.

“America’s Favorite Sponge!®” was conceived when Krause ran a car detail and product development company that, among other things, marketed a urethane foam buffing pad. Krause asked its vendor to create a pad that was as rough as possible with “eye sockets” to clean fingers and “hair” ridges to clean underneath fingernails.*

His aim was to offer autoworkers a gentle alternative to harsh cleansers and pumice for cleaning dirt, grease and oil off their hands. The sponge they created performed well, but it sat on a shelf for years. Until the day Krause used it to scrub his lawn chairs. It worked so well on the furniture, he tried it on his dishes. Voila.

With the addition of a smile to match the shape of silverware, Krause created the original Scrub Daddy. Soon after, he invested in packaging and production and filed for a patent. But that wasn’t the first patent the company filed.

In December 2007, Scrub Daddy filed a design patent for a “Hand cleaning foam sponge”—the sun shape with two eyes. (The trademark for the name “Scrub Daddy” was issued in September 2011.)

Then in November 2011, the company filed another design patent for a “Dishwashing and scrubbing tool”—the sponge with the sun shape, two eyes and smile made famous on Shark Tank and currently on the market. That patent was issued in October 2013.

Design patents usually last 14 years, so the second invention, the Sponge Daddy as we know it, should be covered by a design patent until October 1, 2027.

So from 2007 through 2016, Scrub Daddy staggered its patent filings:

Scrub that smile off your face: Restraining the competition

In February 2014, Scrub Daddy filed a complaint against a competitive product—“Smile Daddy”—saying selling and distributing “Smile Daddy” infringed the trademark “Scrub Daddy” and its patent. As a result, the defendant was enjoined and restrained from selling its sponge and had to pay Scrub Daddy’s attorneys’ fees—nothing to smile about for them, that’s for sure.

Detailed, efficient and effective patent searching led to Scrub Daddy’s appearance on Shark Tank, its growth into a global company and its ability to defeat the competition.