There’s a patent for that? 3 surprising patent stories

Intellectual property and patents are all around us in everyday products.

Have you ever looked around a room and thought about how the things in it came to be? Or where did someone come up with the idea for it? Where was it invented? Everything has a patent, well almost everything does unless it is kept a trade secret. Here are a few everyday products that we take for granted, but have curious or peculiar stories behind the patent. 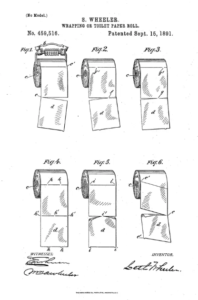 Let’s start with toilet paper. I know, weird one to start out with but you use it every day! The toilet paper patent was issued back on December 22, 1891. Turns out that the original perforated toilet paper was patented in 1871, but it was re-patented into the roll form that you still see today. The Albany Perforated Wrapping Paper Company owns those patents and they also answer the age-old question…over or under. Well, it looks like it’s over.

WD-40 is another everyday product with a unique patent history. It turns out that this particular product does not have a patent. In 1953, the  Rocket Chemical Company was looking to make a rust-prevention solvent and degreaser for use in the aerospace industry. The company felt that if they had it patent-protected, they would have to disclose what the ingredients are, which would ultimately lead to copycat products. A valid intellectual property strategy, by not patenting, the chemical make-up of the product a mystery and therefore it can’t be duplicated. Interestingly enough, it took Rocket Chemical Company 40 attempts were made to get the right water displacing formula…hence the name Water Displacement-40th attempt. 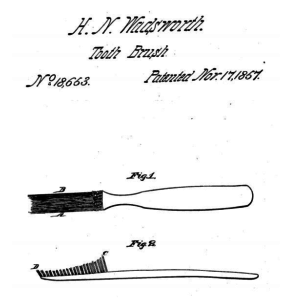 Finally, a product we use every day – the toothbrush. It seems like more of a “modern” invention, but it was actually invented in China back in 1498. Albeit it was much different than what we use today – made from coarse hairs from a hog’s neck and a handle made of bone or bamboo. This type of toothbrush was actually used until 1938. At that time nylon bristles were introduced by Dupont de Nemours. They named it “Doctor West’s Miracle Toothbrush.” Even though the first American to patent the toothbrush was H.N. Wadsworth in 1857, it wasn’t until after soldiers came back from World War II that people started embracing the nylon brush. They saw the soldiers had an increased interest in good hygiene and that caught on to the American people.

So next time you use something, think about how it got started. It can be a pretty interesting story.