What is Solitaire: Lemelson MIT?

This guest blog was written for IP.com by Solitaired.

Despite its fun and relaxing nature, solitaire can get a bit monotonous at times. That’s especially true for those who play it daily. Luckily, there’s a way to rekindle your passion for the game – try playing another variant.

The Lemelson MIT is a great place to start.

What is Solitaire: Lemelson MIT?

Solitaire: Lemelson MIT is a version of the classic card game Solitaired developed in collaboration with the Massachusetts Institute of Technology.

It uses a custom-made deck, which features pictures and names of 52 inventors instead of the usual card symbols. To be precise, the cards still feature the standard symbols in the corners, but the middle is reserved for the inventor’s name and picture. You’ll see the name of their most famous invention on the bottom of each card, below the image: 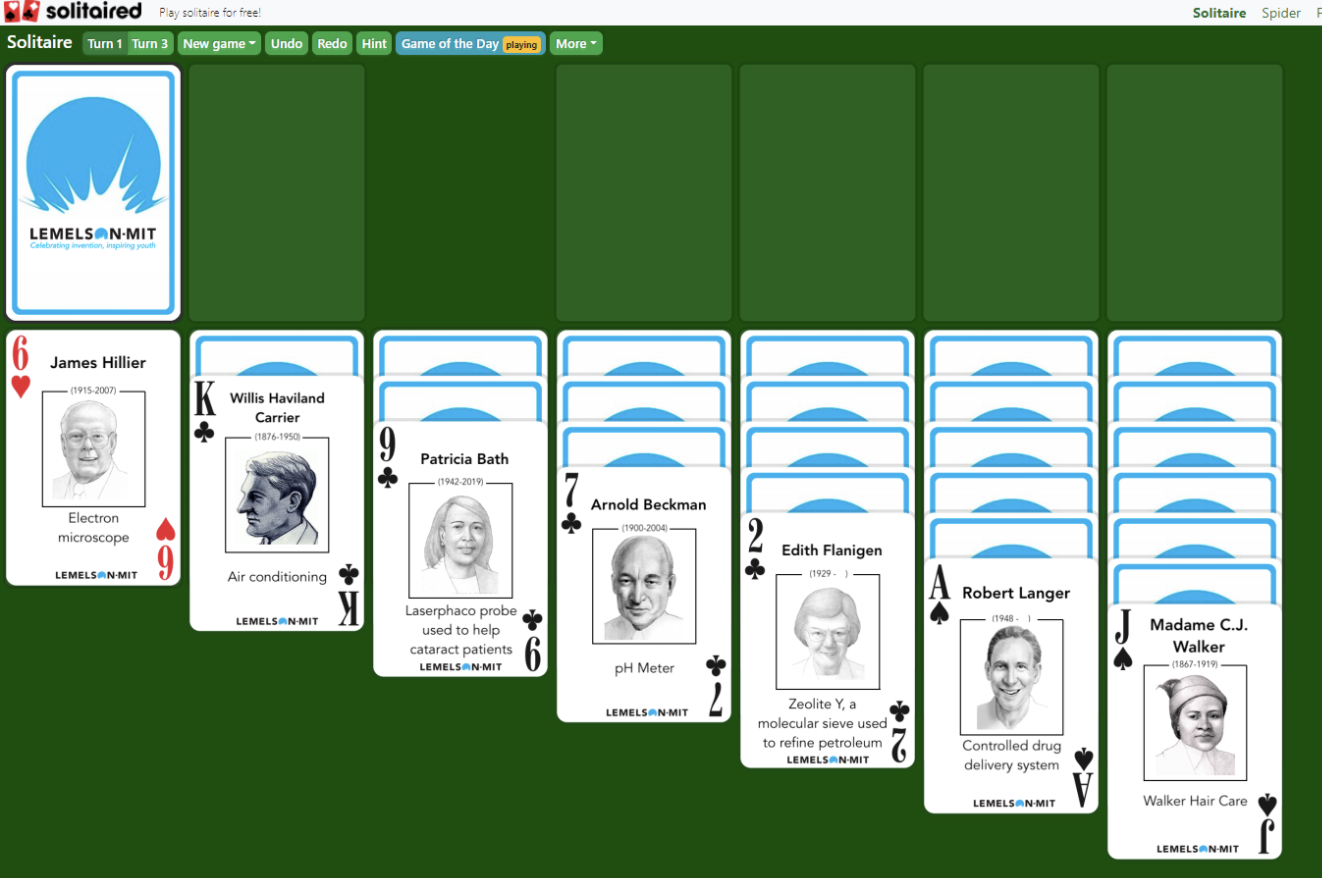 Trying this variant out is an excellent way to keep things interesting with Solitaire. Unlike the classic old deck, the Lemelson MIT deck will introduce you to some fantastic people, and who knows, the game may inspire you to become an inventor yourself!

Perhaps the most significant benefit of this Solitaire variant is that it’ll make you think about just how many brilliant people there are in the world. The inventions of the 52 individuals on the deck are of global significance, and yet, some of these names remain relatively obscure in popular culture. Why aren’t these people more famous? That right there is the million-dollar question. Perhaps, after playing the game, you may want to spread the word and inspire your friends to start learning about these brilliant folks too.

Another beneficial side effect of playing Solitaire: Lemelson MIT is the enhancement of your general knowledge. That can be extremely useful while playing trivia quizzes or trying to impress some of your brainy friends.

So, the next time you wish to play some Solitaire online, make sure to look for the Lemelson MIT deck!

Who does the deck feature?

In the Lemelson MIT deck, you’ll find names that you may or may not have heard of before. Nevertheless, all of these people are certainly worth knowing about, and you’ll be doing yourself a favor by learning who they are and what they invented.

Here are some of the inventors that you’ll come across in the game:

And the list shown above is just the tip of the iceberg.

What is Lemelson MIT?

The Lemelson MIT program awards money prizes to inventors in the US every year. Philanthropist Jerome H. Lemelson founded it as a part of his Lemelson Foundation. The idea behind the program is to promote the work of individual inventors.

Both undergraduates and graduates can participate in the Lemelson MIT competitions, and the best ones will win prizes. The winner takes home $500,000, which is the biggest cash prize for an invention in the entire country.

Solitaire: Lemelson MIT was created to promote the program. So, technically, by playing it, you’re supporting the inventors of the world and hopefully making our planet a better place.

You can’t get that from your regular Solitaire game now, can you?