Dismiss
The InnovationQ application will be updated on Sunday, May 31st from 10am-noon ET. You may experience brief service interruptions during that time.
Intellectual PropertyPatents

Does Gender Disparity Weaken US Innovation?

In the global contest to be innovation leaders, the United States, “cannot compete with one hand tied behind our backs. We need… all hands on deck… We cannot leave behind broad swaths of demographics. The engagement of women in innovation, for example, is not where it needs to be, by a significant margin.”[1]

So said Andrei Iancu, Under Secretary of Commerce for Intellectual Property and Director of the USPTO, during an opening session at the AUTM Annual Meeting earlier this month. The United States must recognize that the number of competitors in the field is growing; no longer are only large countries on the field. Innovators from nations as small as Singapore are proving their mettle. Iancu believes that the United States has work to do to continue to be a driving force in the next technological revolution. We have intellectual resources available, and it is time to tap into them all. Iancu warns, “We are leaving a lot of Einsteins on the table. It is critically important for the United States to focus on that.”[1]

Many of those Einsteins are women. The Office of the Chief Economist recently published the report, Progress and Potential: A profile of women inventors on US patents [2], which presents quantitative data that supports Iancu’s concerns about underutilized brilliance.

Looking at the years 1976-2016, researchers studied patents on which women were named as inventors, and then defined common trends and identified prominent characteristics of those patents. Quantitatively, researchers measured the women inventor rate (in a given year, the percentage of unique women inventors with granted patents) and patent output, which comprises the number of patents in a given year that have at least one women attributed as an inventor and women’s shares in patents as part of a team in which credit is evenly distributed.

Overall, the report found that the numbers had a decent increase in the first 20 years of study. Between 1997 and 2016, however, growth was much slower and remains sluggish. One of the factors during the uptick might simply have been the increase in women with higher education and the number of women entering the workforce. Key findings are shown in the figure below. 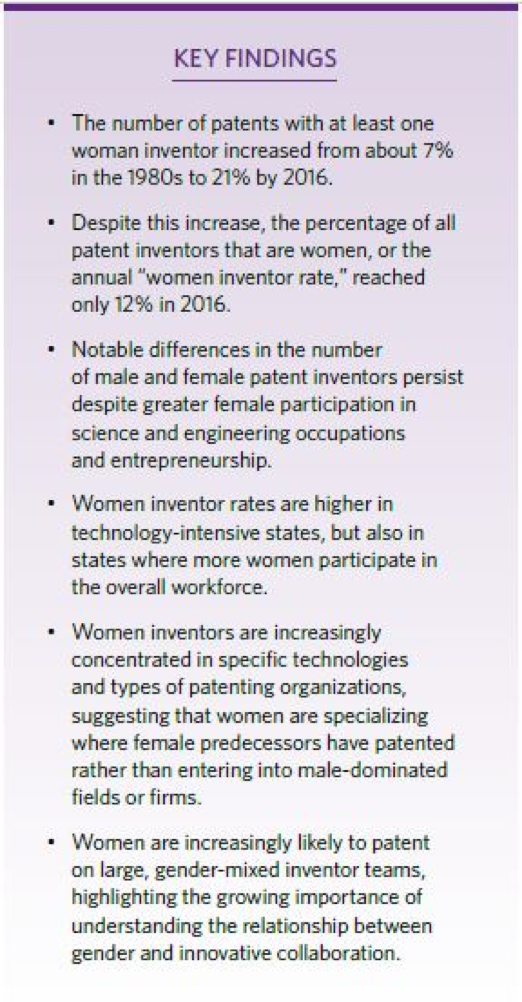 Key Findings from Progress and Potential: A profile of women inventors on US patents

The talent is there. The report indicates that the number of women in the science and technology workforce has grown, but the number of independent women inventors is incongruently low. Further, modern women workers have a higher rate of entrepreneurship than patent ownership. If this demonstrates that women have the presence, the brains, and the drive, then what is thwarting their progress in intellectual property?

The full report is worth reading. Seeing the numbers that support the soft-spot that Iancu addressed is impactful. After presenting facts illustrated with charts and graphs, the report leaves us to question: why does this gender disparity remain in innovation and how can we amend it? Because if we, the United States, plan to dominate on the open field of innovation, we need more people – women – in the lineup.