How Popular Inventions Came to Life: Who Invented the Air Conditioner?

By Rob KlingensmithJuly 14, 2021No Comments

Willis Carrier invented the air conditioner in 1902 and was granted a patent for the invention in 1906. Carrier’s invention was the culmination of centuries of experimentation with air, water, and chemicals to cool the air. The technology has been further developed and applied to modern life throughout the last century as well. Perhaps most notably, Frederick McKinley Jones implemented portable refrigeration in trucks and military field hospitals. These men’s inventions and others like them were commercialized during the postwar boom of the 1950s. Today, the US uses more energy for air conditioning than any other country.

The Long History of Air Conditioning

Humans, particularly the upper class, have long used moving air and water to combat the heat. An early Egyptian “window unit” consisted of hanging reeds, kept damp with trickling water, covering windows and doors. When air passed through, the evaporating water cooled the room and added humidity to the dry environment. The Romans circulated the water pumped from aqueducts through their walls to keep cool. A Chinese invention used huge rotary fans with 10-foot wheels to move air. Water fountains provided spray that helped reduce the temperature of the moving air in a cool room.

During the 1750s, Benjamin Franklin introduced chemicals to the cooling process. He writes, in a letter to physician and scientist John Lining, that he and Cambridge University professor of chemistry John Hadley discovered “the possibility of freezing a man to death on a warm summer’s day, if he were to stand in a passage thro’ which the wind blew briskly, and to be wet frequently with ether, a spirit that is more inflammable than brandy, or common spirits of wine.” This was similar to the work done by the University of Glasgow’s William Cullen, a chemist who experimented with ether-based refrigeration around the same time.

Decades later, scientist Michael Faraday concluded that compressed and liquefied ammonia, when evaporating, cooled the air. These inventors did not seek patents for their discoveries. Therefore, they were freely available for others to apply in the field.

The U.S. Patent Act of 1790 officially recognized the value of intellectual property in the United States. The introduction of the electric telegraph and other global communication methods in the early 19th century increased awareness of inventiveness and competition for monetization worldwide. The resulting innovation boom included efforts to control ambient temperature using water and air, this time with mechanization rather than manual labor.

In the late 1840s, Florida doctor John Gorrie believed high temperatures caused many ailments. He wanted to quickly and cost-effectively cool hospital rooms to make patients more comfortable and aid recovery. Gorrie’s solution was a compressor powered by animal, air, water, or steam. This technology was the first in mechanized artificial room cooling. Gorrie was granted a patent for his Ice Machine in 1851. However, he was unable to profit from the patent due to a combination of public skepticism and the lobbying efforts of “Northern icemakers who profited from shipping ice to the South.” 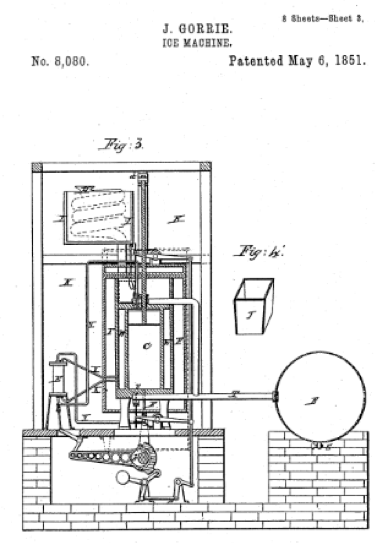 Buffalo native Willis Carrier was not interested in human comfort or health when he began working on the technology that would become air conditioning in the early 20th century. Rather, the Buffalo Forge Company engineer needed to reduce temperature and humidity for a client, Brooklyn-based Sackett-Wilhelms Lithographing and Publishing Company. The publisher struggled with wrinkled pages and unstable ink during New York’s humid summers.

Using what he already knew about heating objects with steam by sending air over hot coils, Carrier altered the process by filling the coils with cold water to produce cool air. This was an electrical method of evaporation that reinvented the strategies of the ancient Egyptians and Chinese. It also circulated and cleansed the air. He revealed the innovation in 1902. The patent for the Apparatus for Treating Air was granted in 1906. 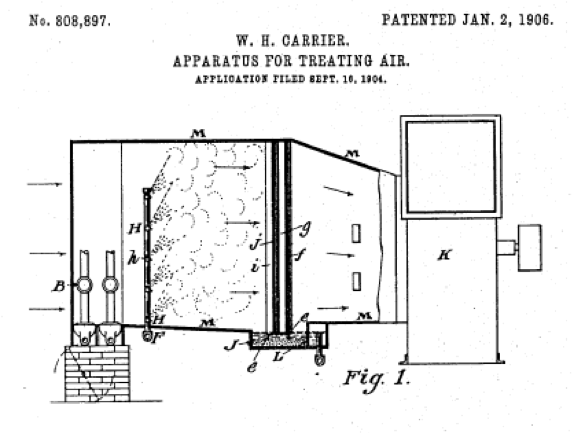 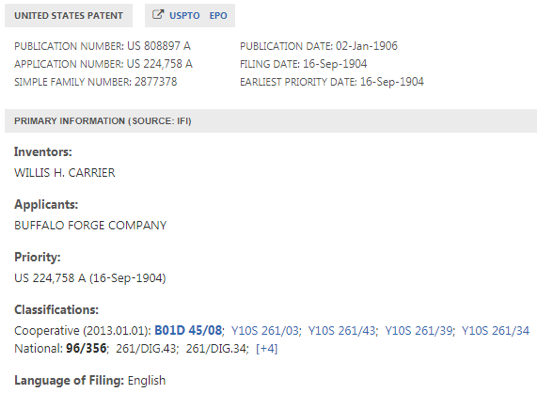 Around the same time, textile manufacturing executive Stewart W. Cramer was looking for ways to control the temperature and humidity of the air in North Carolina’s cotton mills. In a speech at the American Cotton Manufacturers Association’s 1906 annual conference, he “used the term ‘Air Conditioning’ to include humidifying and air cleansing, and heating and ventilation.” His technology for doing so, the Humidifying and Air-Conditioning Apparatus, was granted a patent in 1907. 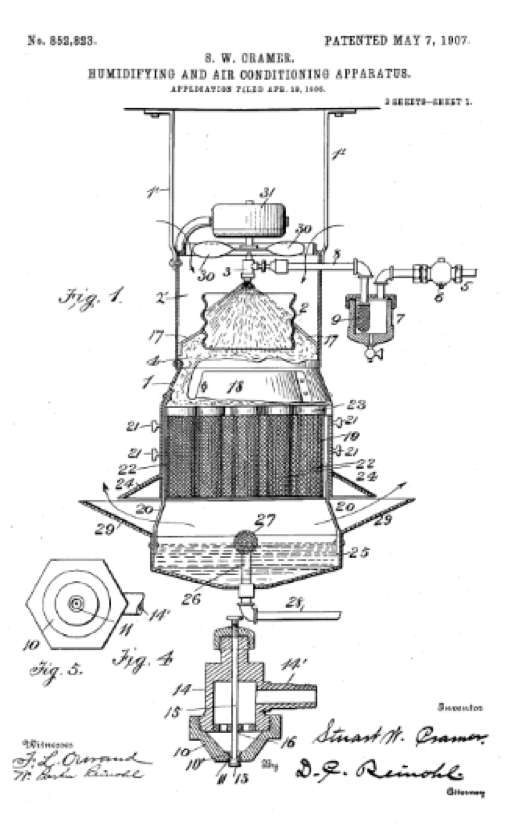 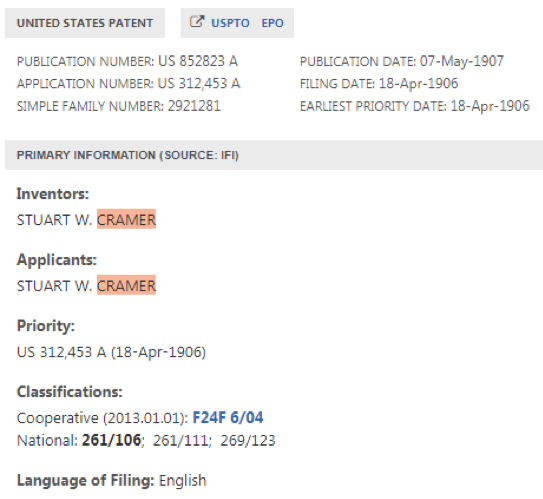 Cramer’s novel terminology, which is itself IP, was quickly adopted by Carrier to describe his own inventions. Carrier then began the Carrier Corporation, specializing in air conditioning and refrigeration.

Modern air conditioning, though developed for industrial purposes, was quickly adopted for commercial purposes. In the 1920s, refrigeration systems were installed in movie theaters to provide respite from the summer heat and encourage moviegoers of all classes to enjoy what had previously been a rather sweaty form of entertainment. This introduced the concept of air conditioning to the American public. Businesses and factories began fully utilizing air conditioning in the 1930s and 40s. The 1950s saw the miracle of home cooling. Today, more American homes have air conditioning (either central A/C or window units) than dining rooms, garages, or dishwashers.