If you have ever been to Mardi Gras in New Orleans, you know how crazy it can be. The colorful beads, artistic masks, and other fun trinkets. But have you thought about how safe those things are? Or where they end up after the party?

Back up… tell me more

To start, the beads themselves are actually toxic. They have lead, bromine, arsenic, phthalate, plasticizers, halogens, cadmium, chromium, mercury, and chlorine…what??? Yes, those beads that you see everyone wearing have been found to have those toxic chemicals on them. Twenty million pounds of those plastic beads are shipped to the U.S. each year, and 75% of them end up at Mardi Gras, in New Orleans. In 2018, there was 950 tons of debris left in the streets and 620 tons of it headed to landfills. Unfortunately, a lot of the beads make it into the waterways, which means those chemicals get into the drinking water.

Naohiro Kato, a molecular biologist at Louisiana State University, is taking on those beads and making them biodegradable. And he did so by accident. Kato was originally working with his students on a medical application using algae. The students were storing the microalgae in the labs and were supposed to check on it three nights a week. One night, the students forgot to check the lab and when they looked the next morning, they discovered a large glob of algae gathering oils on the bottom of the centrifuge. When Kato saw this, he immediately thought it could form a key ingredient for globular bioplastic beads. 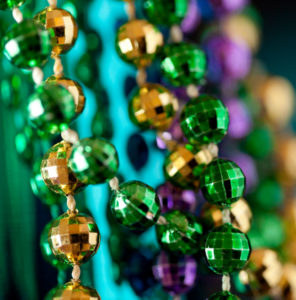 After this discovery, Kato’s team worked on growing the microalgae specifically for beads that would biodegrade. Using the sun, these microalgae could actually be harvested from pond surfaces in Louisiana. Kato’s method is one that mixes the microalgae with chemicals to oxidize compounds in the algae, and once he knew it was one that could be patentable, so he decided to apply. In April 2019, his patent was issued.

Kato talked to the Mardi Gras organizers to see if they would be interested in reducing the plastic footprint of the celebration. They liked the idea and the word spread throughout the industry.

This new version of the beads will biodegrade in one-to-two years, in both soil and water. Once Kato’s process is defined for making the beads, they will also look at producing other trinkets, such as gold doubloons, on a commercial scale.

As great of an idea as this is, it also comes along with a hefty price tag – almost ten times higher than the regular beads. With plastics being an issue with the environment they are looking at ways that they can subsidize this sort of project. Kato is looking to make about 3,000 necklaces for next year’s Mardi Gras. Anyone know a pond the size of a football field in Louisiana that they could use?