The Heart of the Matter

How many inventions make you feel good from head, to heart, to toe? Actually, this one started with the entrepreneurial spirits and hearts of two guys who put their heads together and designed a sock to help millions of feet. Now, these socks are not just popular, they are beloved.

Randy Goldberg and David Heath were friends that worked together and then decided to venture into some business of their own. When they learned that the most requested clothing donation for homeless shelters was socks, they decided to help with that. Goldberg and Heath founded Bombas in 2013 with the mantra, “Bee Better”. Bombas is the Latin word for bumblebee. Likening their community improvement mission to the way the bees in a hive work together for a common good, the men built a community-oriented business model. So, they would start a sock business, and for every pair of socks they sold, they would donate a pair to homeless shelters.

Problem: To give as many socks as possible, they needed to sell a lot of socks.

Problem: How could they make a better sock?

Now, these entrepreneurs with a mission to comfort peoples’ feet had to become inventors – sock engineers.

To bring an idea to invention status, it has to be new, useful, and non-obvious. With socks, so common and not often evaluated, that is a challenge. Taking one pain point at a time, the team developed solutions. A “hand-linked” seam smoothed out the bulky line across the toes. Several improvements to the components upgraded performance (had anyone ever considered sock “performance” before?) to give us socks that go where they are supposed to – and stay there! A new honeycomb-structured weave taught the sock how to provide support in the right places. Further, a fresh combination of superior cotton and wool materials presented not only softer socks, but socks that keep feet healthy and dry.

Bombas developed a lot of intellectual property around making a better sock. In order to protect their ideas while ensuring their freedom to market and monetize them, they needed to secure a patent.

With a filing date of June 2014 and a publication date of March 2015, the USPTO granted Bombas, LLC, a patent for: Sock (USD723261) [3]. The credited inventors are David Heath, Ian Velardi, and Aaron Wolk, all of Armonk, NY. This is a design patent, with the simple claim: “The ornamental design for a sock, as shown and described.” Fourteen simple figures follow, illustrating the novel honeycomb structure that provides arch support to the sock. 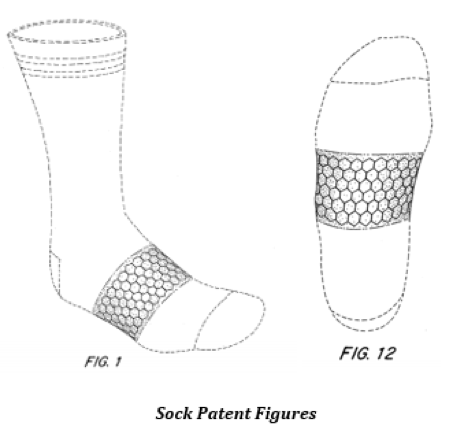 The basic design is secured i.e., actively enforced until March 3, 2029. From that initial piece Bombas has expanded sock options for their customers. Bombas socks are specialized for men, women, and children. There are low socks, high socks, even no-show socks. Bombas socks can be casual or dressy. All incorporate the patented honeycombed arch design.

As a small startup company, Bombas needed capital and investors to help them grow. It seems that a business model in which the company sells half of its product and gives half of it away would be tough to present. Undeterred, Bombas made a very public pitch to the expert money-makers on Shark Tank in September 2014. This was strategic timing, after they had filed for the Sock patent.

Goldberg and Heath had the advantages of potentially secured intellectual property, a good sales record of $450,000 in just nine months, and a 2015 projection of $2.7 million in sales. This was the bait that they wanted a Shark to bite for 5% equity in the company upon a $200,000 investment [4].

For a variety or reasons, most of the sharks swam away. Daymond John, who was struggling with his own sock inventories, was interested. He thought he might not only profit, but also learn from the media guys, turned philanthropists, turned engineers, turned entrepreneurs and future patent holders. Smelling the potential, John wanted a greater share. The deal was made for “$200,000, plus financing for inventory and production, for a 17.5% equity share in the company” [4]. Bombas was fully afoot!

In terms of Shark Tank success stories, the Scrub Daddy is still #1, with over $100 million in online and brick-and-mortar sales since its appearance on the show in 2012. Bombas holds the #2 spot. It focuses on ecommerce after establishing a solid infrastructure and partner to support it. With $50 million in sales in 2017, Bombas is leapfrogging its projections. In February of 2018, it reached a major milestone years earlier than anticipated: Bombas donated 7,000,000 pairs of socks to the homeless and other community outreach centers.

Innovation comes in many forms. The Bombas team, the busy bumblebees, successfully implemented a novel buy-one-give-one business model while finding an exciting yet practical way for people to participate in improving the world, one pair of really special socks at a time.